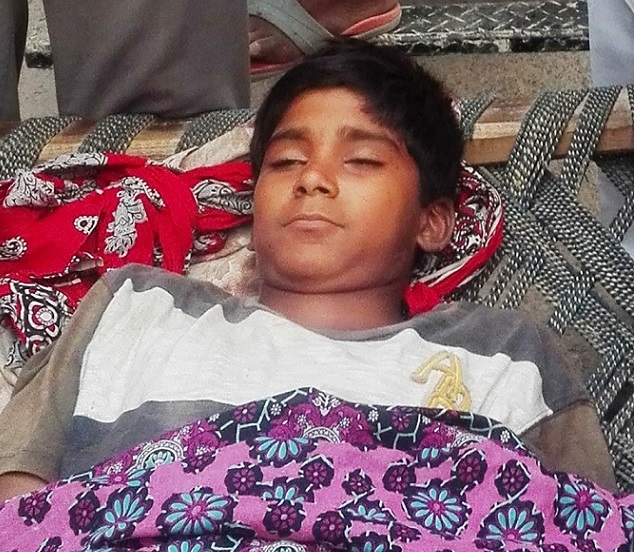 It is tragedy with this case, Deputy Superintendent Police of Sadar Police Station commented in the Express News, Duniya News etc. this child was died due to heart attack after drinking coke cola and fruit. It has been observed on the spot that it is a pressure of political leaders and Land Lords of local incidental area. And there is group on the local area that is trying to terrifying victim family and surrounds people to be silent and avoid to tell basic truth to anybody. PCP confirmed from local area personalities that this child’s uncle had been converted into Islam having two wives and living among Muslim Land lords.

A representative of “Pakistan Christian Post (PCP) Bureau Chief Bishop Farhad Bhatti of Anglican church investigated from local personalities – Land Lords after reading national newspaper about comments of police officer. It has come to knowledge that Police, Land Lords and political leaders are trying to hide main facts about Christian child who was sexual abused.

Bureau Chief “PCP” personally interviewed victim family, visit incident place through source person where Christian child was hang on the tree. This tree is in front of house in field along-with road. Children of that house told to source person, they heard crying voices on said date in neighboring house before Tree where Christian Child had been hanged on.

Bishop Farhad Bhatti was informed by Pastor Shahid M. Paul after confirming from local personalities, child’s friend. Children of area told another stories of sexual harassment in that area, there are so many cases about sexual abuse. When Source persons asked the people of house in the front of Tree (Boohar). Children’ parent had been silent and showed ignorance about victim child in fear of powerful people of area. It seems that they had been already terrified about death of child.

PCP investigating team found out important news through source person. Christian child who was sexual abused. Child’ case had already been blocked in the police station almost. SHO, Farooq Ranja, DSP Saleem Warach did sure that they will file “FIR” after getting DNA “Forensic report” as it will come from Laboratory after one month. It seems that Government is not serious with death of Christian child.

Church will provide legal assistance to abused Christian child who had been died dated 23th August 2016. Church’ Pastor of Christ Assemblies International told during Interview to Bureau Chief Bishop Farhad Bhatti. He is trying his best to pursue legal aid for court case of a sexual abused child as para legal team will pursue legally.
Bishop Farhad Bhatti did condolence with victim family. Local people of area are in great grief and too much disturbed and their feeling had been persecuted. They request to Bishop Farhad Bhatti for opening School in the locality, they told to Bishop that there was School in that area. Now there is no School for Christian children. People were so sad to explain that now their children are working in factories or wondering in the streets. They got great loose because of closing School.

Bishop Farhad Bhatti prayed with victim family and local area people. Pray for opening new School and pray for protection of Pastors and families, Pray for peace and Because Pakistani Christian have so many cases of persecution, rapes, forced conversion, burning of churches, Christian colonies already. May God bring peace and inter – harmony in Pakistan.

The Foundation Stone of the Shelter for Homeless is Laid by...

UK wants Pakistan to take back thousands of migrants

Christian mother tortured on not converting to Islam