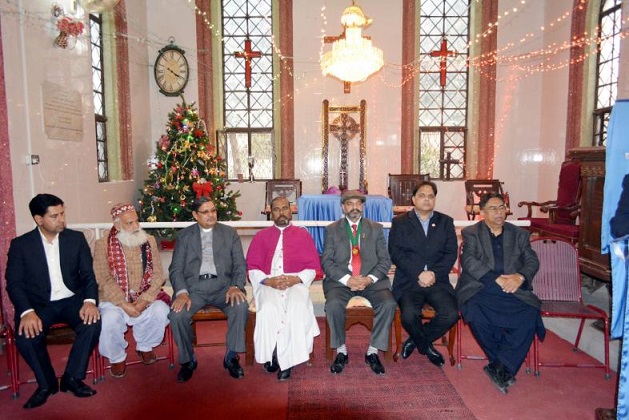 Before the start of inter religious harmony ceremony the Lord Mayor of Nottingham City UK Mohammad Saghir, Chairman PCSW&HR Mr. Muhammad Ijaz Noori, Bishop of Sialkot Rt. Rev. Alwin Samuel, Moulana Abdul Ghafoor Noori, Director PCSW&HR Ch. Muhammad Ijaz and other notable personalities talked with Media and shared their point of view on the different national and international issues on inter- religious & inter-cultural harmony, social tolerance and minorities affairs as well as overseas Pakistani’s contribution for the creation of the positive image of Pakistan in Great Britain and other countries. They also spoke that Christians are Pakistanis as Muslims and deserve equal rights as guaranteed in the Constitution of Pakistan as well as according to Islamic teachings. They also demanded for the immediate removal of sense of insecurity among the minorities, elimination of discrimination, provision of fundamental rights and an improvement in the status of human rights, provided to all communities of Pakistan in constitution of Pakistan.

While taking during the inter religious harmony ceremony the Bishop of Sialkot Rt. Rev. Awin Samuel once again warmly welcomed to all participants of ceremony especially their Muslims guests. He said that perhaps it is first time in the present history of Sialkot that Muslims leaders come to Church to extend their Christmas greetings this showed a great gesture of religious and social tolerance as well as interfaith harmony and national spirit. He specially thanked to PCSW&HR Chairman Mr. Muhammad Ijaz Noori for organizing this ceremony with the collaboration of Diocese of Sialkot. He also thanked to Lord Mayor of Nottingham City UK to participate in the inter religious ceremony. Bishop of Sialkot Rt. Rev. Awin Samuel also said that by participating in each other religious festivals cheers we may make Pakistan stronger and peaceful as per the vision of found of Pakistan Quaid-e-Azam Muhammad Ali Jinnah.

The Bishop of Sialkot also said that I believe that we both Christians and Muslims must recognize with joy the religious values of each others that we have in common, and give thanks to God for them. Both of us believe in one God, the only God, who is all justice and all mercy; we believe in the importance of prayer, of fasting, almsgiving, of repentance and of pardon; we believe that God will be a merciful judge to us all at the end of time, and we hope that after the resurrection He will be satisfied with us and we know that we will be satisfied with him. We should recognize and respect our differences. “Those are the important differences which we can accept with humility and respect, in mutual tolerance; this is a mystery about which, I am certain, God will one day enlighten us. He further added I believe that today, God invites us to change our old practices. We must respect each other, and we must stimulate each other in good works on the path of God.

While addressing during the ceremony the Zonal Khateeb Gujranwala Division Auqaf Department Moulana Abdul Ghafoor Noori said that Islam has no space for extremism, fundamentalism or obscurantism and those who happen to be extremists are in fact unaware of the real spirit of Islam. Allah Almighty has not created any contraction in religion. Islam is religion of peace & love and orders to respect the all religions and human kind.

The Zonal Khateeb quoted the saying of the Holy Prophet that Islam creates ease and does not pave way for difficulties. The Prophet said in Sahih Bukhari, when you preach religion, create easiness and do not create difficulties and contraction. Convey the message and invitation to people in such a manner that they get glad tidings, feel openness within themselves lest they should adopt hatred and run away from Islam. Islam not only condemns conservative approach but also ordains us to root it out. The approach of the Holy Prophet was open, frank and accommodating.

He also added that to believe in all Prophets of God is essential part of our faith. Prophet Muhammad was always very respectful towards the Christians. According to Islamic historians, Ibn e Saad and Ibn e Hisham, once there was a delegation of Byzantine Christians, who were traveling from Yemen to Madinah. The delegation was lead by a bishop by the name of Zqyd al-Usquf, who came to discuss a number of issues with Prophet Muhammad. When the time of their prayer came, they asked the Prophet if they could do their worship in the mosque of the Prophet. He answered, “Conduct your service here in the mosque. It is a place dedicated to God.” The Zonal Khateeb extends his Christmas greetings to all Christians residing here in Sialkot and Pakistan.

Addressing during the ceremony Chairman PCSW&HR Muhammad Ijaz Noori said that need for interfaith dialogue and harmony cannot be greater and more acute than it is today. The international community will have to take the initiative to restructure their mutual relations on the sure foundations of respect and supreme humanitarian values with utmost honest and sincerity and respect for religions and holy personages associated with them should be a central plan in bilateral and multilateral relations. He said that PCSW&HR has not only accepted the importance of interfaith dialogue but also adopted it as an important tool for promotion of brotherhood and establishment of durable peace. The Islamic faith, being a religion of peace, is characterized by the teachings of respect of humanity and its promotion without any discrimination. Islamic history is replete with countless examples where fundamental rights of people of every segment and faith were protected over and above any discrimination of caste, color, creed, race, language and culture. It is about time that dialogue is initiated to ward off any possibility of clash of civilizations aimed at making this world hub of peace, love and justice and open-ended right to freedom of expression is regulated under the accepted international values and laws.

Mr. Noori further said that role of Christians in establishment of Pakistan and its development must be acknowledged as the sacrifices offered by them were not less than that of Muslims. He said that today is a historic day for Pakistan and all its communities. He also said that Christians are Pakistanis as Muslims, and deserve equal rights as guaranteed in the Constitution of Pakistan as well as Islamic teachings. He also demanded immediate removal of sense of insecurity among the minorities, elimination of discrimination, provision of fundamental rights and an improvement in the status of human rights, provided to all communities of Pakistan.

While addressing during the ceremony the Lord Mayor Mohammad Saghir thanked to Pakistan Council for Social Welfare & Human Rights and Dioceses of Sialkot to provide him such a great opportunity to attend this splendid ceremony which is unique example for interfaith harmony and Chairman PCSW&HR Muhammad Ijaz Noori addressing during the interreligious harmony ceremony at Hunter Memorial Church Sialkot Chairman PCSW&HR Muhammad Ijaz Noori addressing during the inter-religious harmony ceremony at Hunter Memorial Church Sialkot really this is proud for me to participate as chief guest in this event. He said that interfaith harmony and intercultural alliance is essential for the eradication of terrorism & Extremism, real democracy, justice & peace and sustainable human development in Pakistan. He added that for the eradication of poverty and promotion of interfaith harmony in Sialkot the social, trade, cultural and public relations between UK and Pakistan will made more strengthen.

Lord Mayor also said that it is great stratification for me that the people of different religions are living together here in Sialkot in very friendly and cooperative atmosphere; I will present the example of this inter-culture harmony in front of people of Nottingham as well as United Kingdom. He said that all religions invariably believe in the selfless service to the needy humanity.

He further added that religious harmony will only work for the betterment of humankind. Islam emphasizes on the dialogues and stands against any kind of discriminations, so in every respect, we should welcome all possible dialogical openings and we should advocate peaceful negotiations in times of unfortunate clashes. It would be a good gesture if religions could collectively involve in serving the humanity. The Lord Mayor suggested that it would be good if we have a national network of religious leaders committed to the ideal of religious and communal harmony. This body could be vigilant about the communal tensions in various part of the country. The body should take initiatives in organizing meetings of religious leaders in those localities where unfortunate conflict arise. It should aim in stopping any possible outbreaks of conflicts and fights. We could make the body a religious philanthropic panel, which has regional operations too. Volunteers could be promoted in spreading the good news of cooperation and harmony.

Persecution of religious minorities in Azerbaijan reported to UN

Basant-Festival is not Allowed this Year Again: Lahore High Court