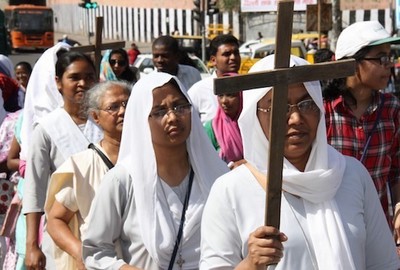 NEW DELHI: (Christian Times) – A court in Indian state Madhya Pradesh has sentenced 13 Christians to 6 months of jail over charge of forced conversions. Those sentenced also included a blind man Bhalo Keso and his wife Bhoori. The suspects’ counsel prayed to the court that the sentence be reduced but the judge remained adamant.

Those sentenced had been arrested in January 2016 and seven of them are labourers. A complaint had been registered against these Christians by the residents of district Dhaar.

It was alleged that the said Christians had been bribing people to convert them to Christianity. Christian organisations have declared the sentence a violation of human rights and recorded their protest.

EVANGELIZING IS WRONG, SAY NEARLY HALF OF CHRISTIAN MILLENNIALS

An Application filed about the enactment of minorities quota in Sindh...