LAHORE: Official holidays will be announced on the religious festivals of non-Muslims in the future. The announcement was made by Minister for Human Rights Tahir Khalil Sindhu during a ceremony in Aiwan-e-Iqbal. The ceremony was attended by MPAs from Punjab including Tariq Gill, Shakeel Khokhar, Fauzia Ayub Qureshi and members of Hindu community.

It is pertinent to mention here that the resolution for the holidays on non-Muslim religious festivals by the National Assembly in 2016. The resolution had been presented by Pakistan Muslim League – Nawaz (PML-N) member Ramesh Kumar, stating that official holidays should be declared on the religious festivals of the non-Muslim communities like Diwali, Holi, Christmas and Easter.

During the debate on the resolution, Minister of State for Religious Affairs Pir Aminul Hasnat had said that the authority to announce holidays rested with the interior ministry while the then Minister for Information and Broadcasting Pervaiz Rashid had said that the minority community communities’ festivals could be declared as official holidays after a review of the overall holidays in the country. He had requested the house not to reject the resolution and later it was adopted unanimously.

The resolution stated that the government believed Holi, Easter and Diwali should be announced as official holidays. 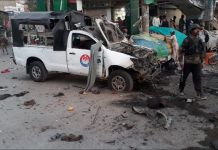 Thirsty Christian Accused of Blasphemy for Drinking Water from Mosque