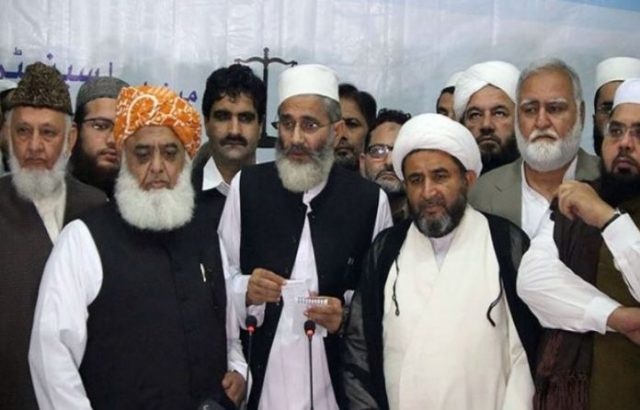 It plans to hold a ‘Million March’ in Karachi on Thursday against the Supreme Court’s recent Acquittal of Asia Bibi — a Christian woman who was previously condemned to death on blasphemy charges by lower courts, Muttahida Majlis-e-Amal (MMA) said, on Monday.

Last Wednesday, the apex court, in a breakthrough judgement accepted Asia Bibi’s petition against her sentence, following which several religio-political parties taken to the streets to protest, which at some places had increased rapidly into rampage.

JUI-Fazl Chief Maulana Fazlur Rehman, whose party is one of several that constitutes the multi-party MMA alliance, announced a day later that a ‘Million March’ would be held in the anchorage city, where he said “the future strategy on the issue would be chalked out.”

Chief Maulana Fazlur Rehman’s party today summarized their plans; and advised his party-workers to gather at Shahrah-e-Quaideen on November 8th 2018.

The Thursday’s march would be the Rehman’s second major political event after he led a rally in Peshawar city last Friday.

In the Peshawar rally, the JUI-F head, held the PTI government responsible for the disorder in the wake of the SC’s decision, and declared that his nationwide anxiety would continue until the government was exiled.

TWO CHRISTIANS SISTERS FORCED TO LEAVE THEIR CITY AND PROPERTY FOR...