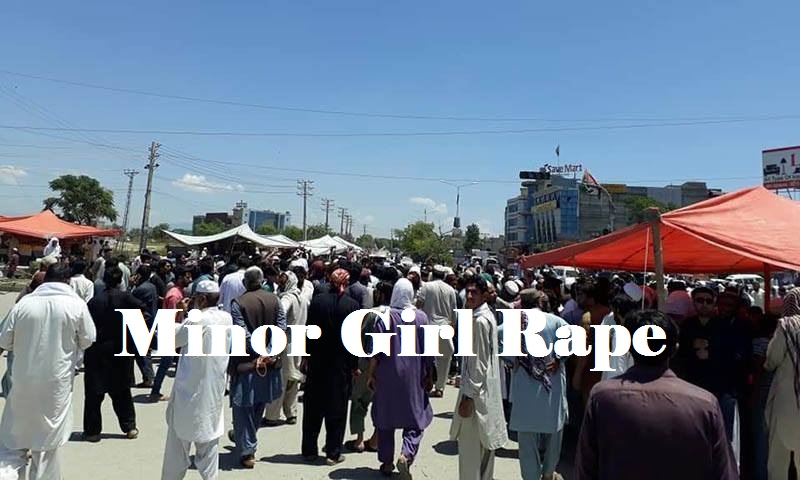 Two people were detained on Tuesday in connection with the abduction, murder and alleged rape of a 10 years old girl, Farishta, in Islamabad’s Shahzad Town area, police sources told to media.

The family of victim is staging a protest at Taramari Chowk in Islamabad, calling for action to be taken against the criminals. Negotiations between the family and district administration are underway. The protesters said they will bury the victim after the negotiations are successful.

As per an FIR filed by the victim’s father, Gul Nabi, his daughter had gone out to play on May 15 around 5pm, but did not return. Upon failing to find her, he feared that she had been abducted.

He specified that he had gone to the police station “instantly” and reported the happening. A missing person’s report was filed on May 16, the FIR stated.

The victim’s father demanded in the FIR dated May 19 that his daughter be recovered and those involved in the incident be punished. The body was of 10 years old Farishta was found on May 20, according to reliable sources.

Gul Nabi said that there were torment marks and wounds on his daughter’s body. He supposed that his daughter, who had been missing for at least four days before her body was found in a wooded area; had been raped before she was murdered.

The suspects, Nabi alleged, had also sprinkled acid on his daughter.

Nabi, also alleged that the Shehzad Town police, instead of taking action or filing an FIR, had victim blamed the 10 years old girl and posed insensitive questions to the family, such as asking as she had eloped with someone.

MNA Mohsin Dawar, who has been clarifying the case on social media, also alleged that the victim’s parents had continuously requested concerned police station for FIR but they declined.

He confirmed that an FIR had been registered under sections relating to kidnapping (365-B, PPC) on Sunday night (May 19), after the girl’s body was recovered.

Dawar, in his tweet on Monday, alleged that Polyclinic Hospital had refused to conduct a postmortem examination on the body.

Though, on Tuesday, hospital sources told the media that the exam had been conducted and the results are awaited.

“#JusticeForFarishta” was a trending topic on Twitter on Tuesday morning as activists and citizens brought attention to the incident on social media.

The Interior Minister retired Brig Ijaz Shah took notice of the occurrence and ordered strict action against the offenders. The minister also asked the Islamabad police chief for a detailed report on the matter.

The Islamabad Inspector General of Police formed two teams today to examine the incident. One of the teams will be headed by the deputy superintendent of police (DSP) investigations, and the other will be led by superintendent police (rural).

The Station House Officer Shehzad Town Sub Inspector named Muhammad Abbas Rana was suspended from duty in an announcement issued by the office of the SSP Islamabad on Tuesday. The DIG Operations said he had suspended the SHO in order to ensure that a transparent probe is conducted into the case.

Christmas Day passed; still grant of 3 crore for Christians is...