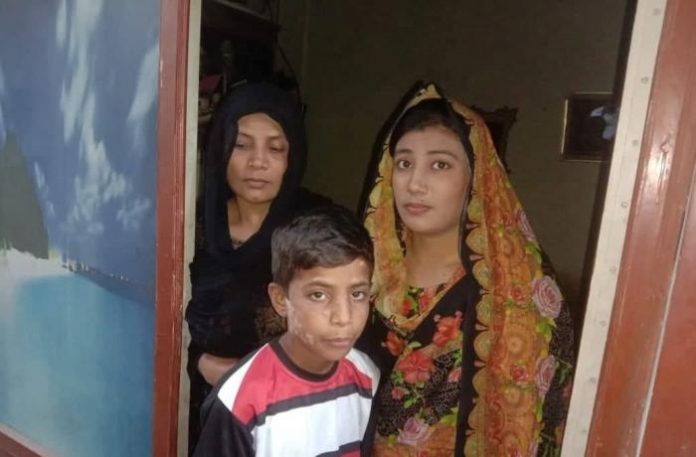 Islamabad: A woman who, with her four children, fled a 16-year insulting marriage ended up in a human trafficking ring that saw her forced into prostitution.

Faced with a husband who beat her, Rita Yousaf (pictured left), 42, a Christian woman from Lahore, was influenced to marry a Chinese man who would “solve all the problems” and guarantee a future for her and her children. Instead she found herself forced into prostitution through her new husband and his friends.

Her whole story, as told by the British Asian Christian Association, is like that of many other poor Pakistani women, sold as brides and then forced to fulfill their husbands’ sexual pleasures or used for organ trafficking.

The problem of Pakistani women, both Christian and Muslim, turned into sex—slaves; for Chinese husbands has only emerged recently. The number of victims involved in this new human trafficking racket is estimated at around 700, but points to the existence of organized trafficking in Pakistan and China.

The “success” of arranged marriages is confirmed by the complicity of clergymen who celebrate weddings and intermediaries who act as procurers and translators.

Rita was 23 when her parents decided to give her in marriage to Yousaf, a Christian mechanic. Apparently, the man had all the credentials to give the young woman a dignified life.

Though, shortly after the wedding, he revealed himself for what he was: a violent alcoholic. Rita trusted that fatherhood might change him. Instead, after 16 years and four children (Fiza, 17; Yeshua 15; Rabiya 13; and Eleesha, 11), he continued to physically abuse her.

Meanwhile, in 2016 Rita decided to leave her husband and go back home to her parents, who were already struggling to keep the family going. In December 2018 a neighbor, Kiran Baji, told her relatives that a Chinese man was interested in marrying her.

After some days of doubt about the potential new husband, so different, the parents were convinced in the end by his commitment to “take care of her and the children would have a happy life in China.”

So, by 2 January 2019 Rita married Xin Pel Xu, in the presence of her relatives, a friend of the groom, a Pakistani translator and the neighbor, Kiran Baji. Afterwards the wedding, the Chinese husband took his bride and her children to a flat in the Multan Chongi area. Though, here she found that she was not alone: ​​six other Chinese men lived at the place with their wives.

In the flat Rita was ultimately forced to have sex not only with her husband; but also with the other six men. She was beaten if she tried to refuse; and threatened with being taken to the police. She was also pressurized so as to get her to pay a lot of money to dissolve of the prenuptial agreement, even if the husband were to pledge divorce proceedings against her.

Rita suffered from typhoid; but managed to escape and return home. She went to the police to file a complaint but her persecutors had already fled without leaving any traces.

“Recent reports suggest hundreds of young Pakistani Christian women have been misleadingly married to sexual predators from China who forcibly place them in situation of slavery or in ruthless relationships with non—Christian men who prevent them from practicing their faith,” said Mehwish Bhatti, an official with the British Asian Christian Association.

“The ruined promises leave families in great depression with mothers and fathers accusing themselves for their poor choices,” she added.

In fact, so many “Broken—hearted families have been left penetrating for their daughters afraid of what has happened – a promise of hope has become an overwhelming blow of ignominy,” explained Juliet Chowdhry, a trustee with the British Asian Christian Association.

Luckily, “It has been heart—warming to see that every young Christian woman who escaped the brutal situations they were in, has been welcomed back to their loving families – a clear illustration that these marriages are not seen to be a trade or transaction.”

Christain in Pakistan hold on to Hope